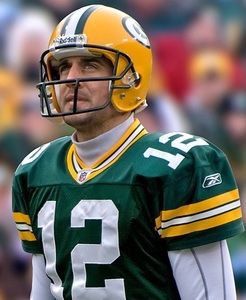 Most professional football fans, at least those who haven’t been stuck on a deserted island for the last twenty seasons, appreciate the acronym G.O.A.T. Knowledgeable sports fans realize that it means the “Greatest of All Time.” In the NFL, there is often a healthy debate over who is the “GOAT” quarterback in the history of the league.

No discussion about who is the best quarterback in NFL history would seem plausible without adding a member of the Green Bay Packers. In fact, when most top-20 lists are written down, three names of Packer fame make the list. Aaron Rodgers Green Bay Packers career has earned him a spot on this G.O.A.T list and here’s why.

Part of a Packer Quarterback Legacy

Adolph Kliebhan took the first snap behind a Packers center in 1921. Albeit a very brief, one start career followed by a sudden retirement, Kliebhan was the first. Over the years, names like Red Dunn, Arnie Herber, and the legendary Tobin Rote operated as the field general for Green Bay.

However, it was late in the 1956 season when the first of the great Packer quarterbacks took his inaugural snap under center. Ironically, this was the season Rote set the NFL record for most total touchdowns in a season, 18 passing plus another 11 on the ground. Green Bay thought so much of Starr’s talent, Rote left for greener pastures in 1957, and number 15 took over for good. Bryan Bartlett “Bart” Starr would become a legend at Lambeau Field, in no small part because of winning the first two Super Bowls. Since many equate greatness with winning, it’s worth noting that Starr is tied with Brady at five, for the most professional football titles won as a starting quarterback.

This might be the only weak spot that Aaron Rodgers Green Bay career is lacking. Make no mistake; Bart Starr will always live in infamy in the hearts of the Packer faithful. Green Bay’s recent success has been mediocre at best. However, Rodgers Green Bay Packers legacy is still being written.

In between Starr and the next most highly respected Packer QB is Brett Favre. Like Starr, Favre brought the Vince Lombardi Trophy back to Wisconsin. During his career, Favre set new benchmarks for Packer quarterback greatness.

But, Rodgers Green Bay Packers performances have erased many of the on-the-field records established by the man he took over for in 2008. Bart Starr and Brett Favre each have established themselves as fixtures in most discussions about who are the best quarterbacks of all-time from any team.

While championships will always be a benchmark, Rodgers Green Bay numbers have been better as a quarterback than most on this list. Here’s why the Green Bay Packers Rodgers may be the greatest Packer or NFL QB for that matter of all time.

Why Aaron Rodgers May Be the Greatest Quarterback of All Time

There are a number of criteria that football experts throw around when grading the best players of all time. When they debate quarterbacks, championships, touchdowns and total yardage dominate most conversations. In today’s statistical age, things like TDs to interceptions and quarterback rating are used as a gauge to judge talent.

If a Championship Is the Benchmark, Rodgers Has a Ring As mentioned, owning a championship ring is a necessary requirement of some when talking about the greatest of all time in any sport. It goes without saying, that NFL quarterbacks are frequently measured against how many Lombardi Trophies they have hoisted during their career.

Tom Brady, Joe Montana and Terry Bradshaw are in an elite class. Brady has five titles, which many feel inks him as the G.O.A.T. when it comes to ranking NFL signal callers.

However, there are naysayers who dispel the notion that to be considered the best at your position should go beyond what are essentially team accomplishments.

Rodgers has won a Super Bowl as well. In addition to being a champion, his statistical numbers rival some of these former QBs who already have a bust in Canton, Ohio.

Marino has been tabbed the single most prolific passer in football. When it comes to statistical passing numbers, most judge all NFL quarterbacks up against the former Miami Dolphin great. Consider for a moment that touchdown passes are another important benchmark with ranking quarterbacks.

On a cool Thursday evening in 2015, a night when Green Bay retired Brett Favre’s number 4, Aaron Rodgers flipped his 250th TD pass to running back Eddie Lacy. A noteworthy feat in its own right, but it was also a full seven games faster than the man with the original record, Dan Marino.

More Statistical Evidence for Aaron Rodgers Being the True GOAT While the Packers current fortunes need to improve, no one feels Rodgers doesn’t have a few more chances to add to his one Super Bowl title. He eclipsed one record most thought to be inked permanently in the NFL archives. Here are some other records in Aaron Rodgers Green Bay Packers career that support a vote for him as the GOAT.

o Two-Time NFL MVP – The NFL presents an annual most valuable player award. While this doesn’t always mean you won the championship, when a player does win the MVP, it’s a signal they were the best in the league that year. Aaron Rodgers Green Bay career has earned him a pair of NFL MVP awards.

o All-Time Career Passer Rating Leader – This might be the single-most noteworthy stat from the Green Bay Packers Rodgers career achievements. Rodgers not only is the highest rated QB of all time; he is a full four points better than second place.

He is the only quarterback in NFL history rated over 100. To further support the argument, two quarterbacks who are invariably part of the GOAT QB debate, sit at numbers 29 and 39. Rodger’s career QB rating of 103.7 is nearly 20 points higher than both Dan Marino and Brett Favre.

o Best Touchdown to Interception Ratio – Touchdowns are one of the positive ways quarterbacks are measured. Interceptions are frequently seen as the other side of this positive. The NFL has a ratio in which they rate quarterbacks based on both these stats collectively.

Aaron Rodgers owns the best TD to Interception Ration in NFL history at 4.20. Now, this is another noteworthy piece of statistical evidence for fans who support the idea Rodgers is really the true GOAT when it comes to NFL quarterbacks.

His 4.2 ratio is more than a full point better than that of New England’s Tom Brady, who many camps argue is the best. Here are a few more of the NFL records that Rogers has posted during his Packer career.

There are other records that strongly support Rodgers as possibly the best QB of all time. He is one of only a trio of QBs to post a quarterback rating of at least 110. There are only three other QBs, along with Rodgers, who tossed 40 or more TD passes in a single season.

The Evidence Speaks For Itself When it comes to the statistical evidence, it’s impossible not to consider Aaron Rodgers as one of the greatest NFL quarterbacks of all time, if not the greatest. Rodgers Green Bay Packer’s career statistics have him as one of the best passers ever to play the game.

When you consider the normal benchmarks used to rate the greatest QBs in professional football, Aaron Rodgers is either at or near the top of every list. Sure, Tom Brady, Joe Montana and Terry Bradshaw have more titles, but they played on tremendous teams. Rodgers has continued to be a statistical marvel in the face of injuries and surrounded by suspect talent.

His hard-nosed, play every down style, is reminiscent of previous Packer quarterbacks like Starr and Favre. However, when all the evidence is considered, there is a strong argument that Aaron Rodgers is beyond just the most talented quarterback ever. He is the greatest NFL QB of all time and as soon as he is eligible, will have a bust carved for his spot in Canton, Ohio’s Hall of Fame.

11 thoughts on “Why the Green Bay Packers Aaron Rodgers Might Really Be the G.O.A.T”